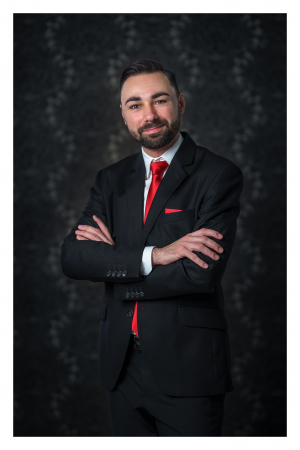 I was born on 16th February 1990 in Zalaegerszeg. I started my studies in the music school in Zalaegerszeg, beginning with playing the recorder and a year later playing the violine. For me this period was the birth of the calling to the teacher vocation. It was the time when I made my decision to deal with music not only as a learner but later to get involved in the field of music teaching which is dedicated to give music a true meaning. I see those years of mine as the foundation of music, acquiring the skill of reading music and the basics of playing a musical instrument.

Between 2005 and 2009 I was at the Secondary School of Arts in Szombathely specialized in solfeggio and organ. My teachers, Zsolt Kiss and Ákos Paulik helped me a lot during my studies. During these years I aquired the fundamentals of singing and chorus leading. I got interested in early music at this time due to a performance of Nelson Mass by J. Haydn. I participated in the concert together with Capella Savaria.

In 2009 I gained admission to the organ faculty of the university of Debrecen. I graduated in 2016. My teachers were Dr Szilárd Ferenc Kovács, Dr Hedvig Jakab and Dr Dezső Karasszon. Meanwhile I inserted a year of studying from Prof. Thomas Nowak and Arvid Gast in Detmold University, Germany.

I have taken part in several master classes of – among others – Zsigmond Szathmáry, Miklós Spányi and Ton Koopmann. In the summer of 2014 I received an invitation for teaching organ in a Lutheran church choir master training in Fót. I obtained plenty of new experience there. At the 11th Ernő Dohnányi Chamber Music Meeting and Competition I received an Award of Excellence with the early music chamber orchestra of this university.

From 2017 to 2019 I taught piano and organ in a music school in Zalaegerszeg, and I worked as the organist in Blessed Virgin’s Immaculate Heart Church in the garden city of the town. I taught organ in the church choir master training in Szombathely, and now every June I teach organ and musical theory in the same training classes in Pécs. I regularly take up comissions as accompanist, as pianist and organist as well. I regularly accompanied Canterina Chamber Choir of Zalaegerszeg.  I received an Award of Excellence as accompanist in the 5th István Gyermán Southern Transdanubia Regional String Competition in Kaposvár in May, 2019.

Beside church service and teaching, giving concerts has a key role in my life. Improvization is closely connected to this. I aquired the basics of that at university, and have always had an excellent possibility to master it during my church service, since it is an essential part of it. The freedom provided by improvization offers a good chance for artists for self-expression. Therefore I am especially happy to take the opportunity for that during my concerts. I also studied to compose at university and I have been dealing with it ever since. From January to June 2019 I acted as the leader of the choir consisting former pupils of Ferenc Liszt Music Primary School.

During my work, including music school lessons, concerts or holy masses, my intention is always to transmit values. Pop music, that is more and more spreading in churches, confuses believers’ scale of values about church music. Zoltán Kodály says: ’By raising standards of church music, religious life can be deepened. Bad church music poisons religious life as well. ’ By initiating ’Sunday Evening Music’ concert series in Zalaegerszeg, my aim was to get the audience to like and understand valuable pieces of church music. My target was not only to make the master pieces of organ compositions known more but also to make the organ more popular. I supported the opportunities for some special musical instrument pairing, too in the past years.

I have had concerts in cathedrals in Szombathely, Pécs, Debrecen, in churches in Budapest, Sopron, Vasvár, Balatonboglár, Nagykanizsa, Kassel, Münster and other places in Germany. I had an initiation together with the local music school - as a participant as well – that was the Open-air Organ Concert in the programme of Egerszeg Festival. I am a regular participant of Bach for Everyone Festival. I often give concerts with the saxophone artist, Melinda Zsófia Fekete, with whom we make a really good match, as we help each other a lot in our professional life. This instrument pairing itself is very special. We regularly make transcriptions for saxophone and organ.

At the moment I work as a music teacher in Gyula Erkel Primary School of Arts and as the organist of Queen of Heavens Church in Újpest.